In 2006, I found the « Kuhlmann » disused factory, a former chemical-textile plant in the countryside of Odomez, in the north of France. The factory had been running from 1926 to 1965, and then abandoned for more than forty years. 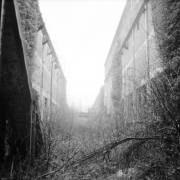 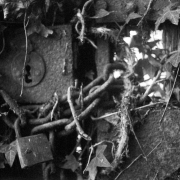 Completely apart from the sole function that gave sense to it, a built territory of eighteen hectares lived on a in a kind of mineral, meaningless obstination. My interest for it did now grew out of this abandonment and ruin. The place was in fact of a surprising richness and liveliness. Moonlike, absurd to man’s purposes, the disused factory became like a strange rocky giant overlooking the nearby worker’s project and charity organization. Stranded in the country with this strange land on their hands, the locals had to re-invent to themselves a way to deal with the place, sometimes in an archaic way, fishing, wandering, destroying, exploring, burning, making an opencast dump of it, hating it and worshipping it at the same time.

For several years, with fellow artist Aurélie Brouet, we came back again and again there, taking pictures, making minute performances and installations, recording sounds, writing journals, drawing. The factory, or more precisely what grew out of it, actually became our own workshop for four years. But very soon we had to deal with a new kind of activity there, with the arrival of the demolition team. The whole place, which meanwhile had became a familiar, personal environment to us, was to be depolluted and destroyed. I then started a sort of leftfield documentary about the destruction of this long-forgotten giant. The already fragmented buildings started to transform quicker and quicker with the intervention of the machines of demolition, in a last burst of activity, exposing new sides of itself and of its awkwardness. Most importantly, what I tried to document during these four years was not any kind of industrial heritage.

It was about the almost mystical experience of a blank place, an architecture that became, over its silent years of after-death life, as strange and fascinating as antique temples from a long-lost civilisation. As the soothing experience of a place freeing one’s imagination, it defined much of my following works.

It fed several photo series, books, sound recordings and collaborations over the years.