Draisine is my solo project. A more self-contained and mastered process than Przewalski’s Horses, it still relies much on free improvisation, revolving mainly around effects-processed electric guitar. Long sessions of studio recordings make the raw matter for post-productions editings, post-recording compositions; the musical composition here is much like painting, as it is about merging independent elements together; and much like sculpting, as it is about giving a definite form to an elemental material.

Draisine spawned from a desire to dedicate my musical practice to energy processing. On the end of the performer, it is about self-exorcism, and dealing with sometimes violent and raw bursts of feelings. On the end of the listener, it is about travelling on a machine of an unknown destination, and whose driver’s intentions are unclear. The listener is going through a swirl of sound, sometimes extremely dense and noisy, unsettling, sometimes sparse and meditative – but always adressed to his whole body.

Since most of my live sound performances are free improvisations based on several individual loops, it sounds sometimes that they are static, not evolving through a pattern like standard musical pieces. This music is thus more about building up a sound architecture around the listener, rather than unfolding a serie of linear and sensical patterns in time.

Recently, I have tried to get closer to a form of archaic blues performance, by incorporating lyrics or riffs from popular songs to ambient, abstract compositions. This produces not exactly covers, not exactly new pieces, but an in-between, trying to cover the breach between abstract, unexpressive ambient music, and the story-telling ritual of the blues performance – in which the guitar acts as much as an instrument as as a totem. In that fashion, I have transformed the classic tune Green Door into a 17mn track slowly evolving from feedback noise into a simple riff, and a reprise of some of the song’s lyrics hidden under heavy distorsion.

First conceived as a way of creating a non-sensical space, distanciating music from expression in a Cagean way, Draisine slowly became more of a cathartic way of expressing oneself beyond any obvious language, trying to tie bonds between contemporary drone/noise music with historical, lyrical American blues. I have been told that my sound performances, although they mainly are noise and drone without lyrics, gave the impression that I was talking to the audience. 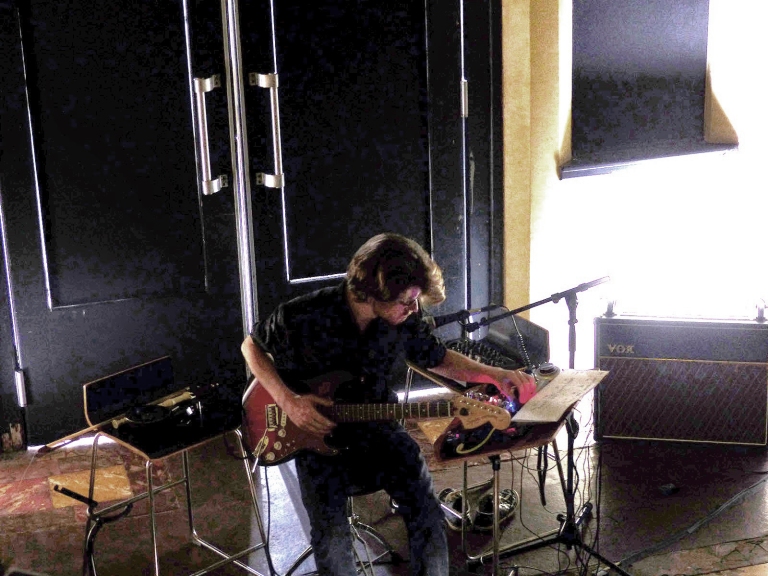