The images of Postcards from Limbo were made in the Ruhr in Germany, a region that chose to keep and maintain, after their closure, some of its largest industrial sites. Fully functional and un-ambiguous, places wholly covered by the sign, without any concession to the symbol, yet they remain now as the pyramids do : there was obviously energy and intelligence invested there, but the meaning of it is now lost to us. These plants may then appear as the traces of a delirious alchemical passion between engineers and the resources of the Earth. Witnesses to the suicidal nature of the colonialist ambition.

This reopening to the symbolic constitute the possible place of a new imaginary projection into space. To fantasize these locations as absolutely different from what they were in the first place and therefore opening a path to a new relationship with the territory, as illustrated by Tarkovkski’s Stalker’s love and faith for these forbidden places. As postcards he would send from the Zone, invitations to join him and feel the relief and sweetness there is to inhabit these spaces, allegedly lost to humanity, but in fact only lost to those who want to be masters and owners of nature. They are, in any case, not lost to the poet.

More information about this project in an extensive article : about the Stalker’s faith and the Zone’s promise as a land, our relationship to territories as colonialists, Igor Kostine, George Didi-Huberman, Michael Snow…

This was my first year’s project in Le Fresnoy. First, off to Germany’s industrial highlights, mostly Ruhrgebiet, to photograph with a 4×5 view camera on Ektar 100 film. Out of about 150,  I finally selected eight pictures for the exhibition.

I also wanted to add a more mysterious angle to the final installation. We shot a silent shortfilm inspired by Tarkovski’s Stalker. It was shot with a small crew of 3, with a Super 16mm Aaton XTRA camera, plus Boule, the black dog, in a disused coal mining site in Belgium. See the dedicated post “The Ghostwood Project”. 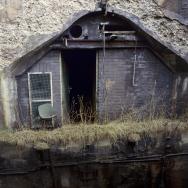 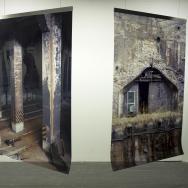 Finally, the prints were made on Fujiclear, a transparent photographic layout used in advertisment for transparent lightboxes, inspired by Michael Snow‘s Powers Of Two. Except here, the space itself was the box and you’d enter into it. Getting advantage of a small cave in Le Fresnoy’s exhibition space, the film was visible in a very different environment.

The eight photos from the installation, and many more, have also been printed on postcards with random extracts of texts i’d written in the research process.